View the calendar of special programming, links to on-demand content and lessons available for Black History Month on the Michigan Learning Channel.

View the calendar of special programming, links to on-demand content and lessons available for Black History Month on the Michigan Learning Channel. 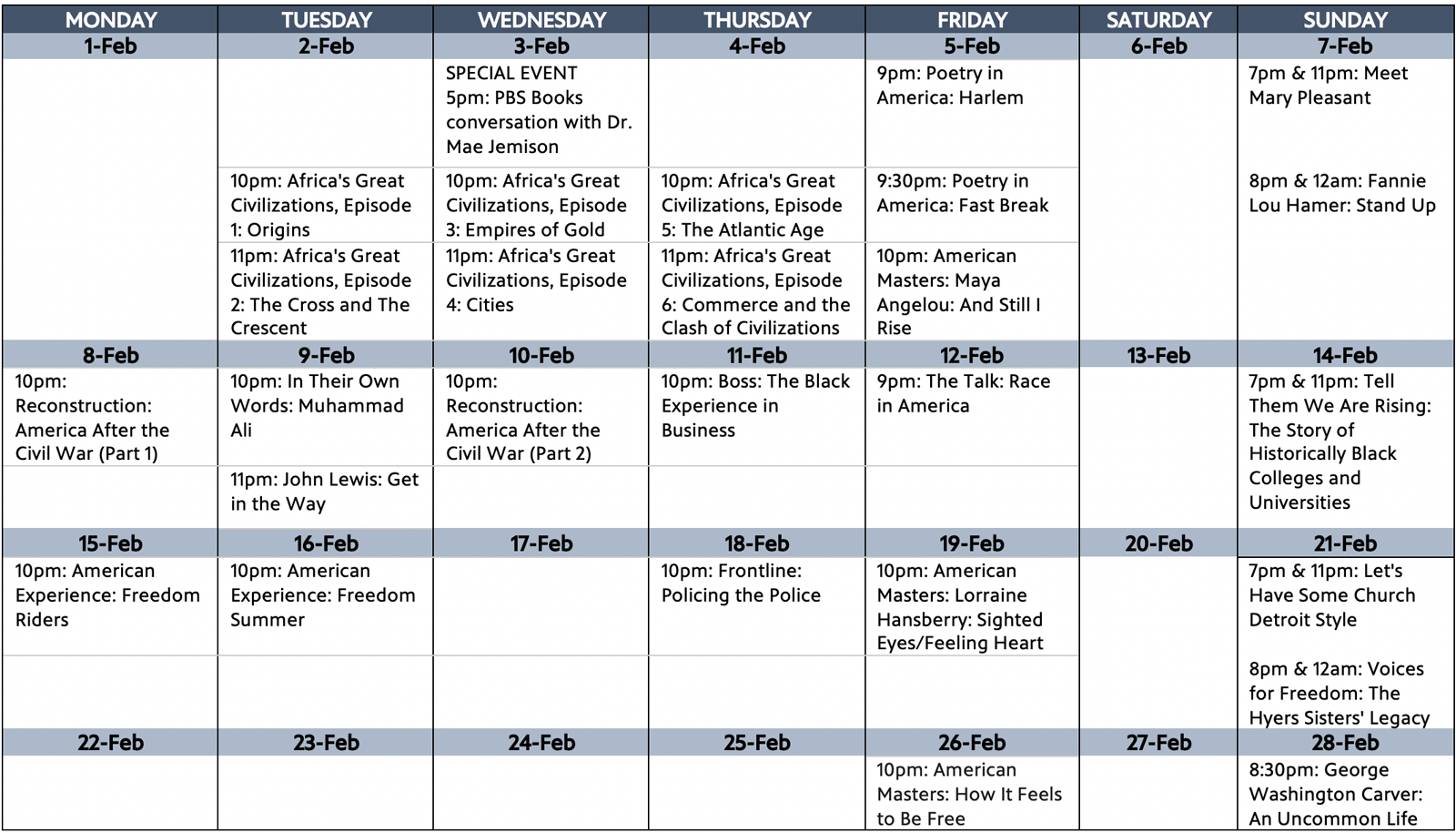 The Michigan Learning Channel is committed to sharing diverse perspectives and stories year-round. In the month of February, MLC is celebrating Black History Month with near-daily programs. Many of these programs are part of the WORLD At-Home Learning programming and have accompanying curricular resources on PBS Learning Media, and many are available for streaming*.

The lineup includes biographies of notable Black Americans, from artists and athletes to activists and scientists. Poetry in America and American Masters share the beauty and power of Black art. And The Talk: Race in America and Frontline: Policing the Police bring PBS’ trusted and thorough reporting to current racial tensions in the United States. Whether in the classroom or as a family, encourage your student to find a program that interests them! 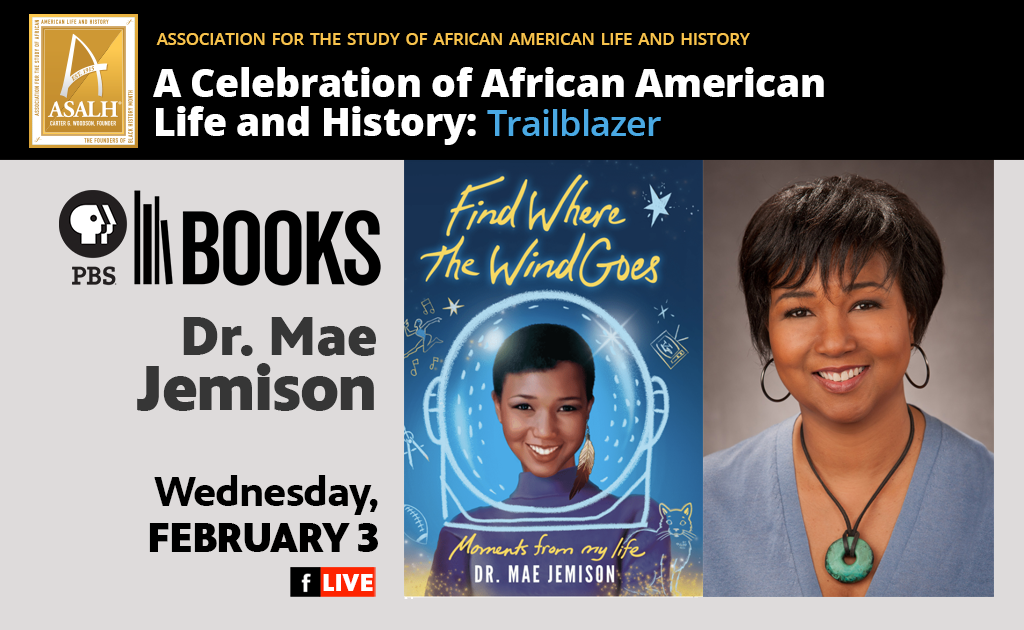 Dr. Mae Jemison, the world’s first woman of color in space, is truly a modern hero with a remarkable, inspiring story to tell. We look forward to sharing her story with the young (ages 8 and up) and the young at heart.

Also from PBS in February 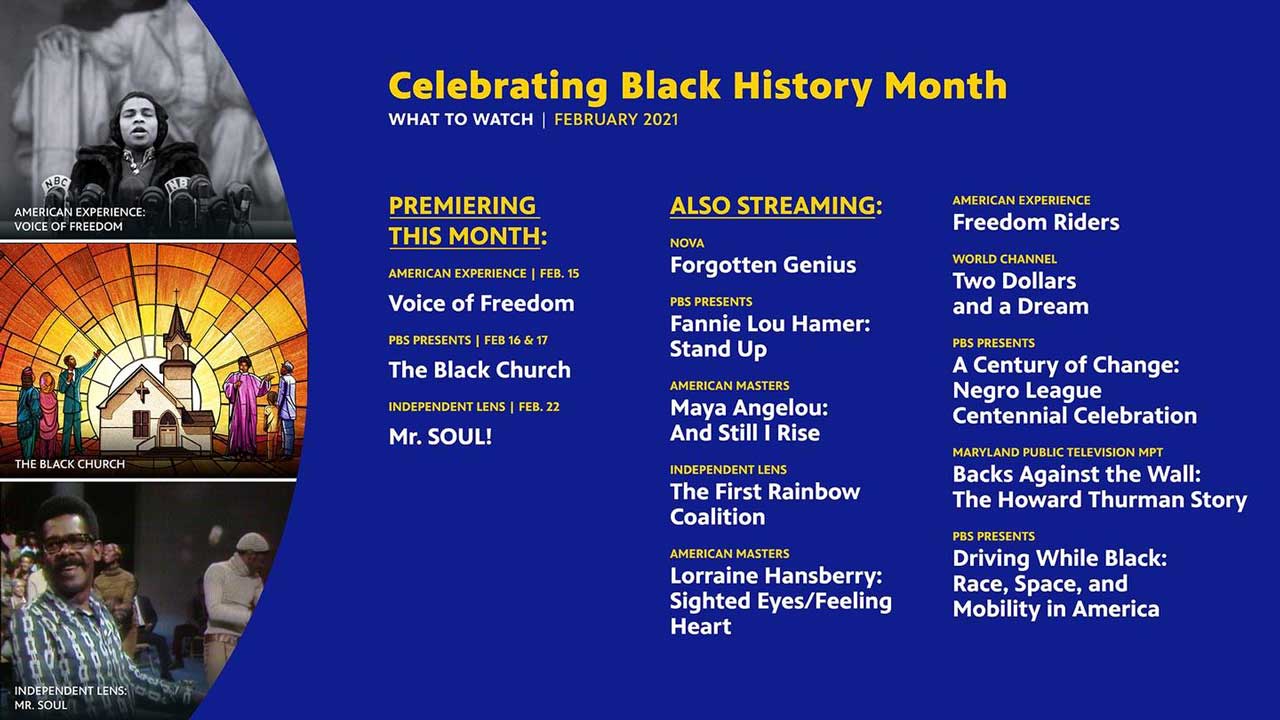 Watch a host of documentaries and digital shorts that highlight Black experiences throughout American history.

Learn about an incredible group of individuals who made history and whose legacies continue to benefit all Americans.


Africa’s Great Civilizations, Episode 1: Origins
Journey with Henry Louis Gates Jr. to Kenya, Egypt, and beyond as he discovers the origins of man, the formation of early human societies, and the creation of significant cultural and scientific achievements on the African continent.


Africa’s Great Civilizations, Episode 2: The Cross and The Crescent
Henry Louis Gates Jr. charts the ancient rise of Christianity and Islam, whose economic and cultural influence stretched from Egypt to Ethiopia. Learn of African religious figures like King Lalibela, an Ethiopian saint, and Menelik, bringer of the Ark of the Covenant.


Africa’s Great Civilizations, Episode 5: The Atlantic Age
Henry Louis Gates Jr. explores the impact of the Atlantic trading world, giving rise to powerful new kingdoms but also transatlantic slave trade. Learn of the revolutionary movements of the 18th and early 19th centuries, including the advent of the Sokoto Caliphate.


Africa’s Great Civilizations, Episode 6: Commerce and the Clash of Civilizations
Henry Louis Gates Jr. explores the dynamism of 19th-century Africa, the “Scramble” by European powers for its riches, and the defiant and successful stand of uncolonized Ethiopia.


Journey through the prolific life of the “I Know Why the Caged Bird Sings” author and activist, who inspired generations with lyrical modern African American thought.


Meet Mary Pleasant is the daring saga of a 19th-century African-American woman, born a slave and raised in Nantucket, who became an international abolitionist, a prosperous entrepreneur, and a civil-rights activist whose work helped alter modern-day civil-rights law. Now called “The Mother of Civil Rights in California,” Pleasant–as activist and individual–was a Martin Luther King, a Malcolm X, and a Rosa Parks combined; she could love across boundaries of race and class while fighting for racial equality, human rights, and dignity for her people. Her life thus can be important today in healing our divisions as a people.

Civil rights legend Fannie Lou Hamer is remembered by those who worked side by side with her in the struggle for voting rights. An African-American sharecropper from the Mississippi Delta, Hamer’s difficulty registering to vote in 1962 led to her career as an outspoken activist, congressional candidate, and fierce fighter for the rights of all.


Reconstruction: America After the Civil War


African Americans had played a crucial role in saving the Union and now, as the country grappled with the terms and implications of Reconstruction, they struggled to breathe life into their hard-won freedom.
Part 2:


At the turn of the century, white supremacy was ascendant; African Americans faced both physical and psychological oppression but found ways to fight back, using artistic expression to put forward a “New Negro” for a new century.


In Their Own Words: Muhammad Ali


Follow Muhammad Ali’s path from a gym in Louisville to boxing successes, conversion to Islam, opposition to the draft, exile from the ring, comeback fights, Parkinson’s disease, and his inspirational reemergence at the Atlanta Olympics.


John Lewis: Get in the Way

Social Studies (Grades 6-12)
WATCH: Stream the Special with PBS Passport
MATERIALS: The Right to Vote | John Lewis: Get in the Way


Boss: The Black Experience in Business


Learn about the untold story of African American entrepreneurship, where skill, industriousness, ingenuity, and sheer courage in the face of overwhelming odds provide the backbone of this nation’s economic and social growth.


The Talk: Race in America


This documentary film chronicles how families of color protect their children’s lives with “The Talk,” which explains what to do and how to behave if you are stopped by the police.


Tell Them We Are Rising: The Story of America’s Historically Black Colleges and Universities


Though much of its history was eclipsed by the explosiveness of the 1960s, the essential role the nation’s historically black colleges and universities (HBCUs) played in shaping black life, creating a black middle class and dismantling segregation cannot be overstated. This documentary explores the history of HBCU’s from their founding to the impact they continue to have for their students and alumni.


From May until November 1961, more than 400 Black and white Americans risked their lives simply by traveling together on buses and trains through the Deep South in order to challenge Jim Crow laws that segregated the interstate travel system.


In 1964, over 700 Black and white students came to Mississippi to register Black citizens to vote and to combat other forms of discrimination, such as inadequate schools and lack of legal aid. Activists hoped the participation of educated middle-class students would bring results and attention to the miserable standard of living of Black Mississippians.


Writer and historian Jelani Cobb examines allegations of police abuses and the challenge of fixing a broken relationship with the community.


Explore the life and work of the A Raisin in the Sun playwright and activist, who played a significant role in the civil rights movement. LaTanya Richardson Jackson narrates and Anika Noni Rose is the voice of Lorraine Hansberry.


Let’s Have Some Church Detroit Style


Let’s Have Some Church Detroit Style is a spirited tale of the struggles and triumphs of a Detroit gospel group The Hallelujah Singers. The 90-minute documentary, which is full of music, explores the personal lives of director E. LaQuint Weaver and his all-star community choir while chronicling the group’s preparation to attend the awards show in Birmingham, Alabama.


Winner to date of five international festival awards and a Telly Award in documentary film, Voices for Freedom – The Hyers Sisters’ Legacy chronicles the lives of Sacramento’s Hyers Sisters — African-American opera prodigies who toured the nation to acclaim from 1871 to 1894 and championed human rights in works that changed American Music Theater forever. The Hyers were celebrated in touring opera nationwide from 1871-73, but in 1876 — perilous times, when touring blackface minstrels denigrated African Americans — they stood up and became “voices” for the dignity of their people. Through beloved music-dramatic works (now called the first American musicals) they depicted black life with dignity to their mainstream audiences for the first time, changing many minds and hearts. The film gives insights into times of lynching, Chinese and black persecution, and Jim Crow while it presents colorful excerpts from opera, music theater, period song, and spirituals sung by internationally acclaimed artists. It is hosted by opera superstar Denyce Graves and is enriched with montages, enactments, a hip-hop poet, historical narration, and informed commentary that shed light on our lives today.


American Masters: How It Feels to Be Free


The story of George Washington Carver’s rise from slavery to scientific accomplishment has inspired millions both black and white. Even today, children study the story of Carver, and lists of prominent African Americans contain his name. But time has dulled the luster of Carver’s reputation for genius. He is remembered now as a man who “did something with peanuts.”