Join the Let’s Read Together Challenge!

Win prizes and a chance to be featured on TV just by reading! 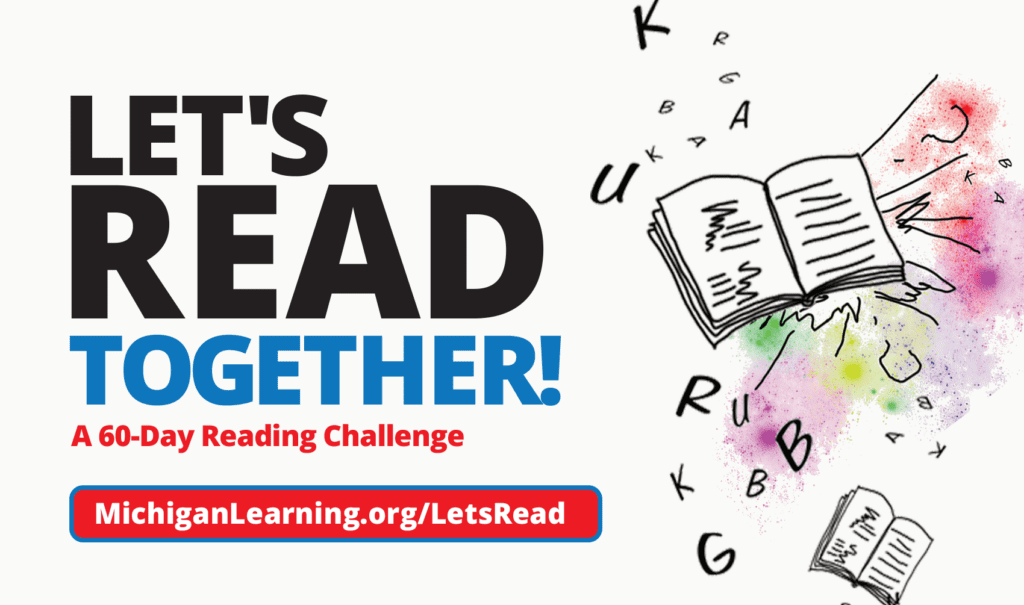 The Let’s Read Together Challenge is back! We are challenging students from Preschool to 12th Grade across the state to complete 1,000 minutes of reading during October and November. Classrooms and families who complete the challenge will be entered into a drawing to win prizes by age range.

What Counts as Reading

Reading happens all around us. Books, comics, graphic novels, road signs, and cereal boxes are all examples of reading. Plus audio books, trail markers, and more! Families and teachers are encouraged to use their own judgement.

Looking for a Place to Read?

The Let’s Read Together Resource Center is full of suggestions for unique places and ways to read across Michigan including zoos, museums, and more.

Did You Complete the Challenge?

The deadline to submit entries to our drawing has passed. Join us again next year for more reading fun!

Winners from this year will be notified in January 2023.

Enter as a Classroom

Enter as a Household

Fill out our sign-up form and read the rules below. An entry form for completed challenges will be available in November.

Students from Preschool to 12th Grade are tasked with reading for 1,000 minutes from October 1 to November 30 to qualify for entry into a drawing for prizes suited to each age range.

Everyone who fills out the entry form will be entered in a drawing for a prize from the Michigan Learning Channel.

Teachers will track how many minutes their class reads together. This could include a teacher read aloud, individual reading, group reading, and time spent reading at home. Teachers are encouraged to use their own discretion on minutes and make this challenge their own! Download a Reading Tracker to measure your progress.

No classroom? No problem! Families and households are welcome to enter the challenge. Track your household’s progress using the Michigan Learning Channel Reading Tracker, then enter to win!